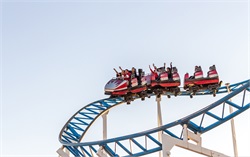 What is a Split Annuity?

When financial markets become unpredictable, some investors express their dissatisfaction by departing the markets in search of safer alternatives.

Annuities may be an appealing alternative for people seeking a way off Wall Street's roller-coaster ride.

Annuities are insurance company contracts. The contracts, which can be paid with a lump amount or regular payments, are intended to be used as retirement savings vehicles. The insurance company agrees to make monthly payments in exchange for premiums, either immediately or at a later date.

In the meantime, the money used to support the contract is growing tax-free. Annuities, unlike other tax-advantaged retirement plans, have no contribution limits. Annuities, on the other hand, can be employed in a variety of imaginative and effective ways.

To generate income and rebuild principal, one technique combines two distinct annuities. The following is how it works:

An investor buys a fixed-period immediate annuity and a single-premium tax-deferred annuity at the same time, dividing capital between the two annuities in such a way that the combination produces tax-advantaged income for a set period of time and returns the original principal at the end of that period.

It's important to remember that any withdrawals from the delayed annuity will be taxed as ordinary income. When the immediate annuity contract expires, the process can be repeated with the deferred annuity monies (see example). Remember that an annuity contract's guarantees are contingent on the issuing company's capacity to pay claims.

Diane invests $300,000 in two annuities: a 10-year deferred annuity with a hypothetical 5% return and a 10-year instant annuity with a hypothetical 3% return. She invests $182,148 in a delayed annuity and the rest in an instant annuity of $117,852. The immediate annuity is estimated to pay $1,138 per month in income over the next ten years. The deferred annuity is expected to grow to $300,000 over the same time period, effectively replacing her principal. 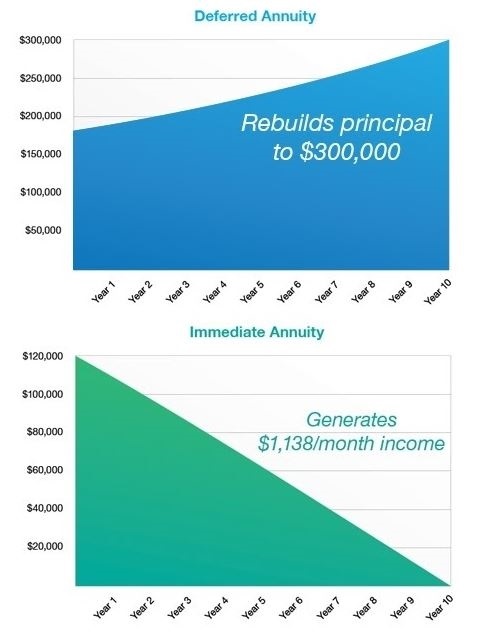 Account and administrative fees, underlying investment management fees, mortality and expense fees, and charges for optional benefits are among the contract limitations, fees, and charges that apply to annuities. Surrender costs are common in annuities, and they are usually higher if you withdraw money during the first few years of the contract. Withdrawals and income payments are treated as ordinary income and are taxed accordingly. A 10% federal income tax penalty may apply if a withdrawal is made before the age of 5912. (unless an exception applies). The FDIC or any other government body does not guarantee annuities. The investment return and principal value of the investment option are not guaranteed with variable annuities. Subaccounts of variable annuities will change with the market. Keep in mind that as market circumstances change, the return and principal will fluctuate. When the annuity is relinquished, the principle may be worth more or less than when it was purchased.

For help with split annuities or any sort of retirement planning, contact us.

Variable annuities are sold by prospectus, which contains detailed information about investment objectives and risks, as well as charges and expenses. You are encouraged to read the prospectus carefully before you invest or send money to buy a variable annuity contract. The prospectus is available from the insurance company or from your financial professional. Variable annuity subaccounts will fluctuate in value based on market conditions and may be worth more or less than the original amount invested if the annuity is surrendered.