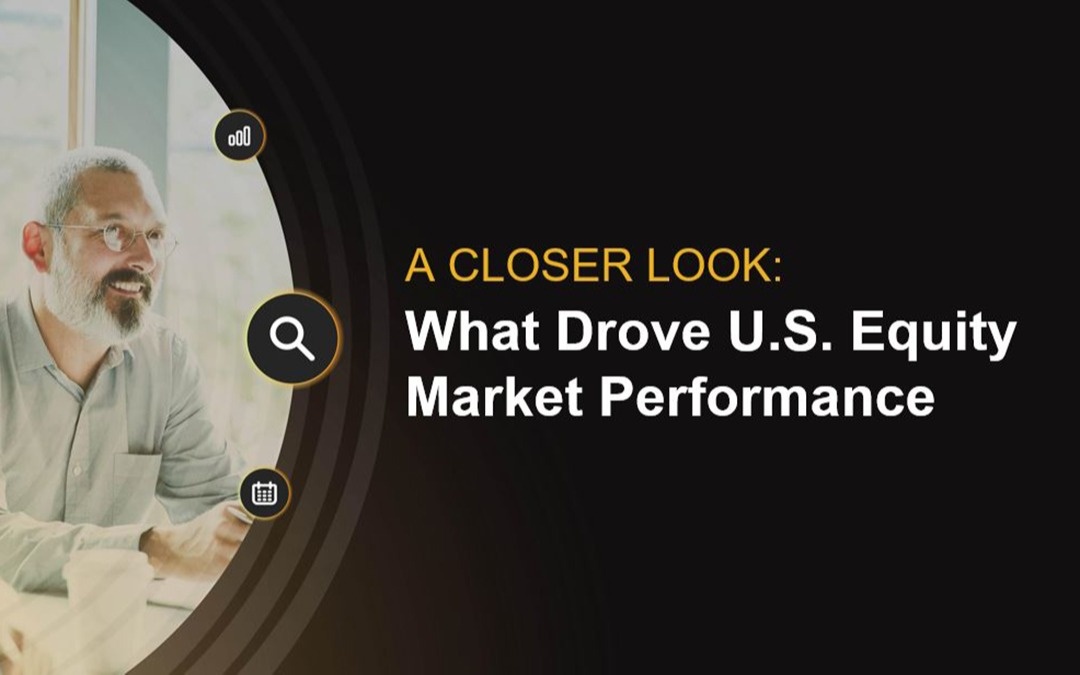 2022 Halftime Report Part 3: A Closer Look at the Labor Market, China and Russia

Welcome to the third part of our 2022 Halftime Report! The goal of this 4-part report is to help you better understand what happened in the markets in the first half of 2022 and what may unfold in the months ahead. In our past two posts, we covered a review of the first half of the year and a closer look at the economy and inflation. Now, we’ll take a closer look at the labor market, consumer sentiment, and the impact of China and Russia on the markets. In our final post, we’ll have an outlook for the second half of 2022.

Let’s start by looking at the labor market and consumer sentiment. 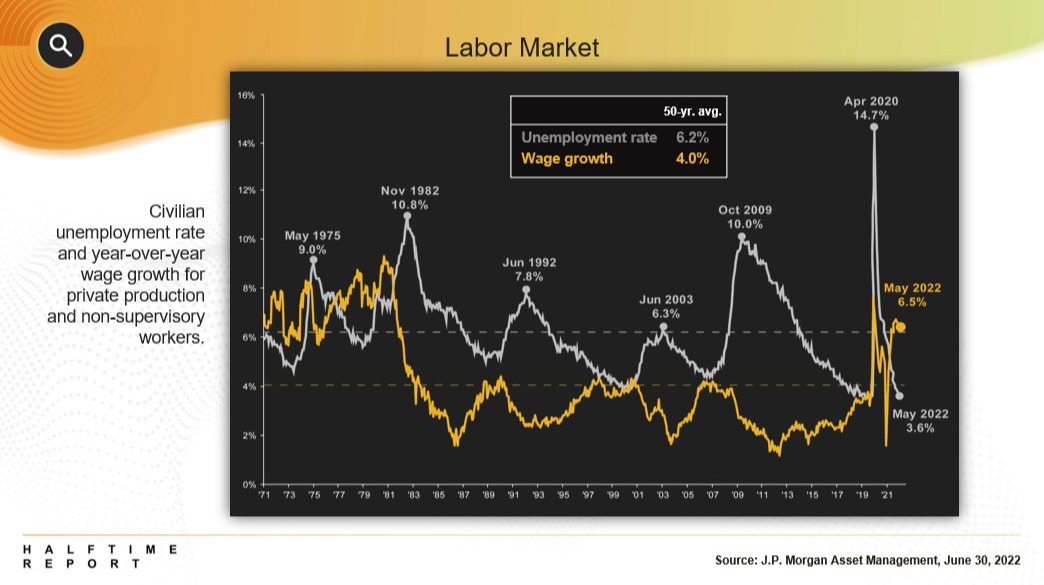 Let’s take a moment to talk about wages and unemployment. This graph shows the unemployment rate and year-over-year wage growth for the past 50 years. Do you notice anything about how these two lines relate to one another?

Most of the time, wages and unemployment have an inverse relationship: when one goes up, the other goes down.

This historical correlation has been a bit murky in the post-pandemic period, which has witnessed a recovery in the labor market as the unemployment rate continued to decline in the first half of 2022 while wage growth has been strong. The good news is that workers appear to have more opportunities to find employment and get paid a better wage. The bad news is that the inflation rate has outpaced some wage gains. 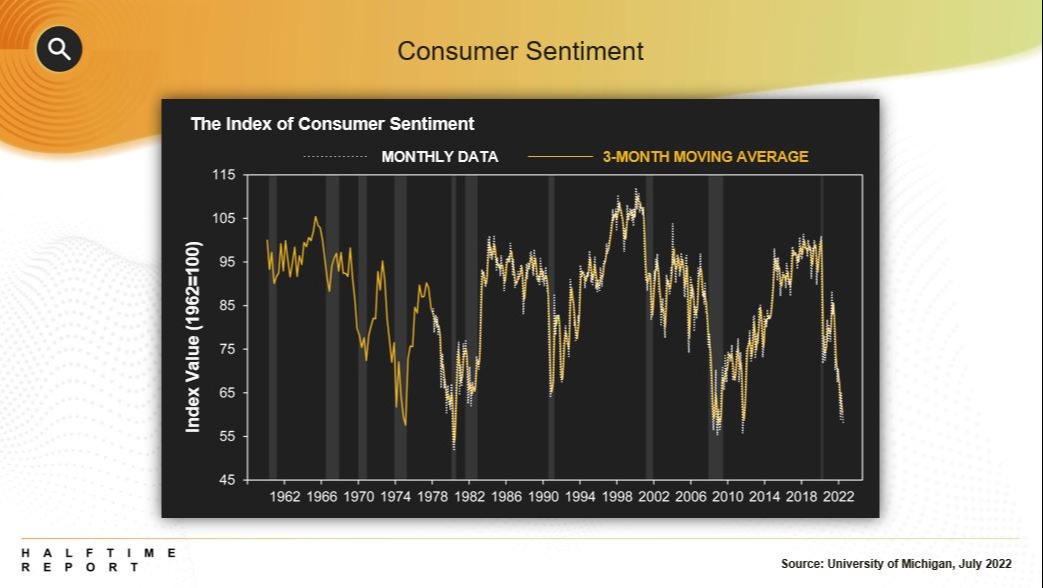 The University of Michigan Consumer Sentiment Index is one of the most widely used sources to help analysts understand how the average consumer feels about the economy. This index is valuable, as it surveys at least 500 residents of the U.S. each month by phone.

The survey uncovers consumers’ opinions regarding their own finances as well as business conditions in the country. Understanding how people feel about the economy is essential because consumer spending accounts for more than two thirds of the Gross Domestic Product (GDP).

As the chart indicates, consumer confidence has been trending lower in 2022. That’s understandable given the acceleration of inflation, the invasion of Ukraine, rising interest rates, and the supply-chain issues. Economists will be watching how lower confidence influences consumer spending for the remainder of the year. 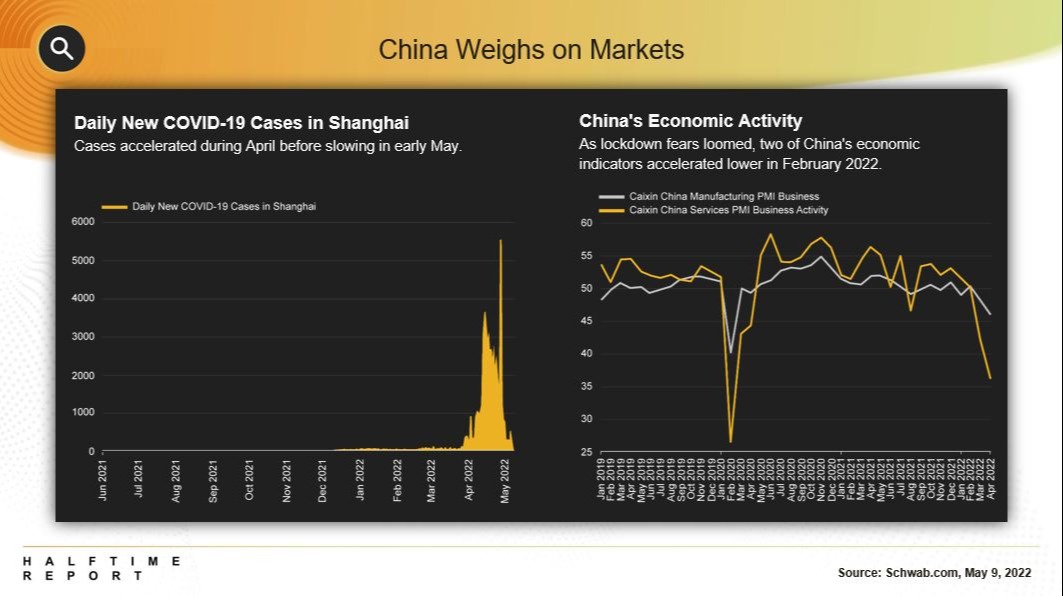 As the world’s second-largest economy, China has a significant impact on the global economic activity in two distinct ways. One, as a consumer of products and services and two, as a manufacturer of goods and services that are in demand worldwide.

China experienced a COVID-19 outbreak in the first half of the 2022. Its zero-COVID-19 policy led to complete and partial economic lockdowns throughout the country but especially in important economic regions and cities, such as Shanghai. In the first chart, you can see the rapid acceleration of Covid cases in Shanghai between April and May 2022.

The lockdowns shut factories and ports that make and ship essential goods in the global supply chain. As you can see in the second chart, the lockdowns have slowed manufacturing and other business activity in China, leading to a slowdown in their economy that investors fear may influence Western economies. 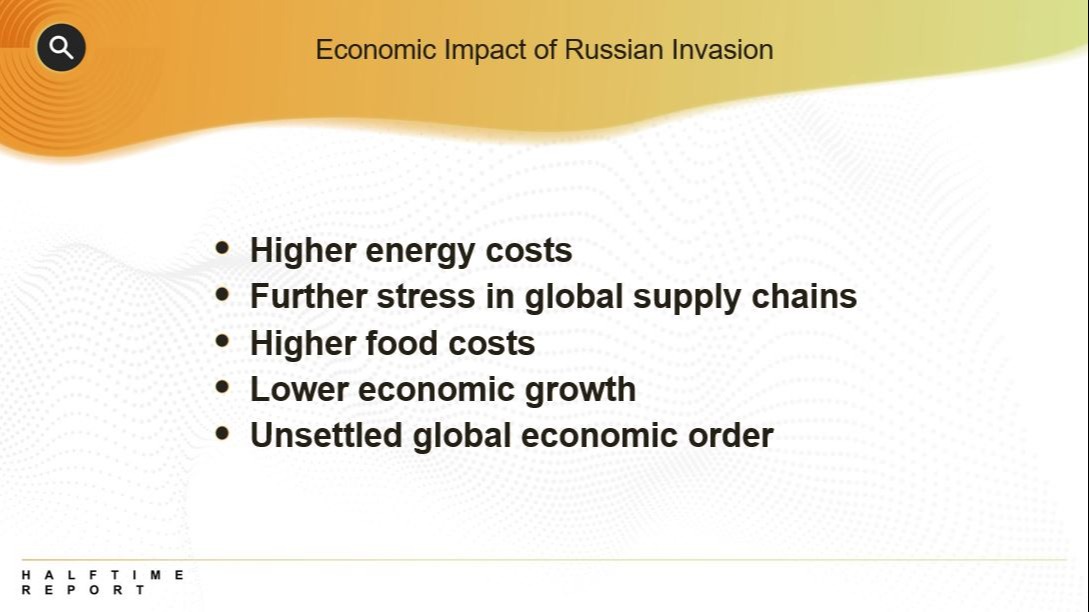 The most devastating consequence of Russia’s invasion of Ukraine is the human toll in lost lives, destroyed communities, and a decimated economy.

As you may have heard, many countries, including most of the world’s largest economies, responded to the invasion with economic sanctions against Russia. Russia has been a major exporter of energy, metals, and wheat. These sanctions have led to sharp increases in the prices of oil, natural gas, some metals, and certain food items. The invasion has limited the ability of Ukraine – a major wheat exporter – to produce and export this commodity. Global supply chains, in turn, have been stressed, as European countries have been forced to find new suppliers for their energy needs, and manufacturers have struggled to replace their sources of base metals.

The net effect has been a general lowering of global economic growth projections. Finally, there are longer-term implications around what the impact will be on the world economic order of the post-WWII period. For instance, we already see a move to “reshore” critically important manufacturing, like semiconductors, as policymakers and business leaders ponder a future scenario in which China might invade Taiwan, a key producer of semiconductors. 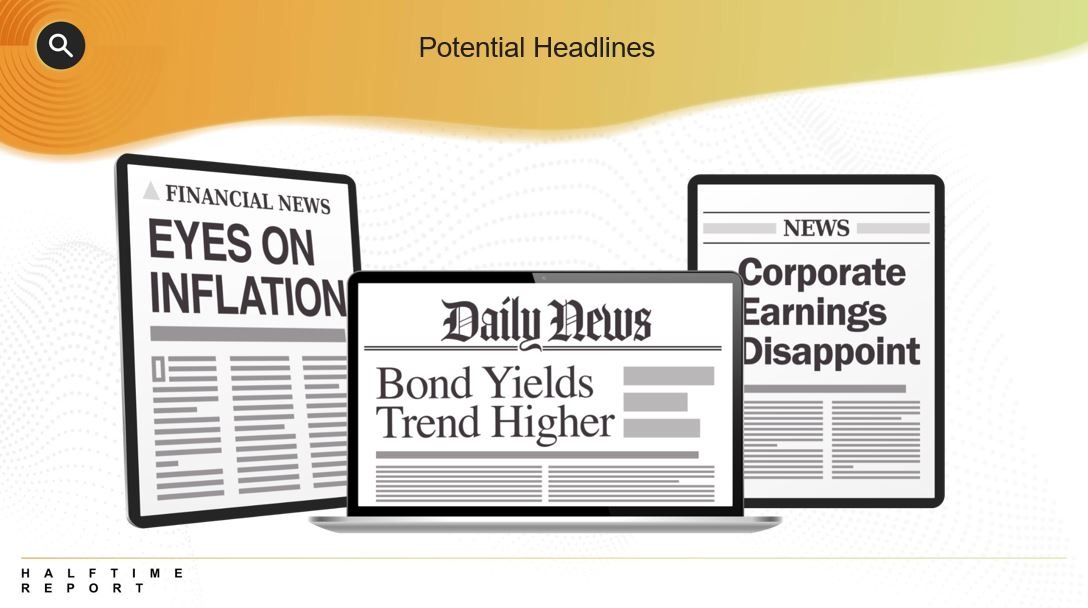 Before we move on to our outlook for the second half of 2022, let’s take a moment to consider the variables that could upend such forecasts.

We believe that the factors that led to the first half’s market downturn may remain critical to how the market may behave in the second half.

The first factor is inflation. The big question mark is whether inflation has peaked or will continue to accelerate. In any case, the Fed may likely remain quite hawkish as it seeks to move monetary policy ahead of the inflation curve. The Fed has signaled a 50 bp increase is possible at its future Federal Open Market Committee meetings. The question is whether inflation conditions require them to become more aggressive with rate hikes later this year.

Another risk is bond yields. As the Fed raises short-term interest rates, bond yields long the yield curve are likely to trend higher. Higher interest rates may have substantial impact on economic growth as it becomes more expensive to borrow money. The other implication for stocks is that higher bond yields may suddenly make bonds more attractive, providing investors with an alternative to stocks that may not have existed for them when rates were near zero.

Corporate profits also loom as a potential risk to stocks. In the first half of 2022, the market punished many stocks when companies fell short of sales and earnings estimates. During anxious markets, investors may be more focused on corporate earnings as evidence that current valuations are fair. Consequently, Corporate America might need to deliver on profits if market sentiment is to improve.

Finally, there is always the so-called “black swan” event: something no one expected, like a pandemic.

Of course, no one can predict what will happen in the future, but we hope the following perspectives help you understand what we believe may be on the horizon.

We’ve gone through a lot of information in our Halftime Report, and you might have lingering questions. So, let us know how we can help!